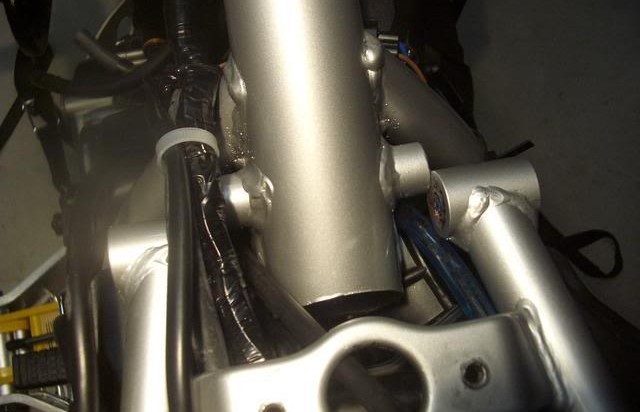 Note – We apologize for the late production of this month’s Technical Insights. We lost a member of our Top Gun family last week; we think you’ll understand that our priorities were with family. However, we hard at it and back to work. Look for product updates later this month!

Jay Bass’ KLR650 recently suffered a broken subframe member and broken aftermarket
subframe bolt (right side, upper bolt). The other three bolts were intact but rusty. The
aftermarket kit consists of four blue, 8mm x 1.25 pitch socket bolts with two washers for
the lower subframe bolts. All three remaining bolts were more rusty than blue and we
suspect rust played a major role in the failure of the bolt in question.

The bottom subframe bolts should be flange-type and higher quality than factory, like the
ones that come with the Top Gun Chain Master. Having a washer adds an extra,
unnecessary sliding surface which aids vibration-induced loosening of the fastener. The
upper two bolts should also be high quality and cad plated. We have had no problem with
factory bolts properly torqued to factory specs with intermediate loctite. Pauline and I have
well over 15,000 crash-free, off-road miles over terrain varying from fairly good to quite
bad while carrying approx. 325 lbs on the subframe without subframe bolt failure. We
suspect that failure of the upper subframe fasteners has to do with bolts coming loose and
shearing or fracturing due to side impact of the rear subframe during crashes.

So what are the fixes for those who want to avoid broken subframe fasteners?

WARNING: Some KLR650 owners are installing expensive, after-market, larger fasteners
for the upper subframe which require drilling a larger hole through the frame. Possibly
unnoticed by most riders, the metal tube that this bolt runs through narrows down
dramatically inside the frame backbone. It is possible to weaken this tube if the wall
diameter is further reduced by a wandering drill bit.

As an alternative, you should be able to drill out the upper fastener holes to the same
depth as for the stock bolts, and then tap the hole for a 10mm x 1.25 pitch, high quality
fastener without drilling completely through. We aren’t recommending using a larger bolt,
nor are we saying the larger bolt won’t be stronger. Just be sure you don’t solve one
problem while creating another.

As we mentioned on multisurfacemotorcycling.com, we have been testing tyres for years
and over tens of thousands of miles on all kinds of terrain. We will be reporting our
findings on this website from now on.

Since most riders of dual-purpose motorcycles do not go off-road, we decided to begin
our discussion with street tires. We have found the Avon Roadrunner to be the best all-
around street tyre for bikes like the KLR650, DR650, and XR650L. Unfortunately, the tyre
has been discontinued, but in its place cam an eve better one – the Avon Road Rider
(model AM26).

The Road Rider comes in just about any size you might want and functions very well, even
up to severe lean angles. This is not surprising considering the tread pattern is very much
like Avon’s sport-bike tyres. The tyre works so well that we were initially a little worried
about its durability. Our front tyre now has 4,250 miles on it and the rear tyre
approximately 2,000 miles. So far neither tyre has shown much wear and we will report
later on final mileage figures. Since our testing is done primarily on twisty rural roads,
riders on more open highways and in town can probably expect longer life. If you ride
pavement only (or nearly all pavement), the Road Rider is the best choice.

For those riders who ride mostly on the street but enjoy an occasional sojourn onto well-
graded dirt, the best tyre we know of is still the Avon Gripster (model AM24). Not only do
you get the look of an MSM rider but tyre wear is great at approx. 14,000 miles on the
front and 10,000 miles on the rear. The downside of the Gripster is selection. Basically,
you can have a 90/90×21 front and a 130/80×17 rear. If that fits your bill, you can’t beat a
Gripster for most street riding, though it doesn’t perform as well as the Roadrunner/Road
Rider when cornering fast at maximum lean angle.

The Avon Distanzia (models AM43 – front, AM44 – rear) falls between the Road Rider and
the Gripster. Tyre selection is better than the Gripster as are its street manners, but it’s
not quite as good on a dirt road. Mileage on our KLR650 Distanzias has been about
10,000 miles on each end.

If it appears we favor Avon, it’s only because they build great tyres that are not over-
priced. We tested some Shinko street tyres as well but found they were a little greasy and
wore out quickly (about twice as fast as the Avons). Cheap tyres are not a value if they
don’t perform well or have to be replaced twice as often.

In the next issue of Technical Insights, we’ll be getting away from Avon when we discuss
intermediate dirt tyres. Cheers!