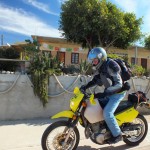 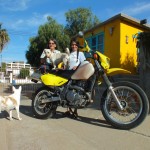 Rod Morris and I recently did our first two day Baja loop since rebuilding and breaking in both of his MMP/KL-A KL engines. The overnite would be at Maria Navarro’s Hostel Sauzal (hostelsauzalbc@hotmail.com, phone: 011-52-646-17-46381) north of Ensenada on Hwy One (344 Avenida “L”). For 15 bucks you get clean facilities complete with a comfortable bed, restrooms and hot showers. Breakfast is included in the price.

The first day included 60+ miles of ungraded dirt, sand and rocks from La Rumarosa (45 miles east of Tecate) through Laguna Hanson, and down to Ojos Negros. Warning: This is not a good road for GS Beemers and other quick steering quarter-ton plus, knobby-shod, sports tourers. On the other hand your 250 – 300 lbs long-travel dirt bikes will love even the washboard and pot holes of which there are many.

The second day was all pavement with lots of curves on Hwy 3 from Ensenada to Tecate through beautiful Guadalupe wine country. Your GS Beemer or KTM big twin sport tourers will love this one if they are equipped with good street tires.

At the half way point between Ensenada and Tecate on Hwy 3 there is a long freshly paved straight away where I pulled to the side of the road motioning Rod to do the same. After Rod stopped next to me I suggested that we drag race my dead stock 2011 DR650SE (644cc) against his fresh 1996 KLR650-A (651cc). Rod’s bike was geared 15/44 (stock is 15/43) and I was running relatively lower gearing at 14/43. Despite my DR’s gearing advantage I was in for a shock. I figured that since my DR was geared considerably lower than Rod’s KLR I would pull him through mid-range and lose out to his double overhead cammed engine at top end.

Despite the extra frontal area created by side bags and a stock wind shield plus the 70 extra pounds of gross weight, the KLR pulled away from my DR in every gear.

Rod thought I would be “bummed out” at the race results but on the contrary I was ecstatic. The results proved; first, that we had built a stronger running more reliable engine without increasing fuel consumption or air/noise pollution and second, I could continue building Pauline’s two-up

This is the first time in my life I ever celebrated getting my butt whipped, but all I can say is, “thank you Rod Morris and Ed Runnels!!”

I was as surprised at the race results as Elden. Back in 2008 Top Gun bought a new “E” model KLR650 to do some testing. One test was a roll-on against Elden’s stock engine 2005 KLR650, now owned by Cuco Villarias of Mexico City. I was following and observing on my 2007 stock DR geared14/42 (stock is 15/42). When the throttles were rolled on I decided to join the fun. My DR pulled both KLR’s with ease resulting in a DR, KL-A, KL-E, one, two, three finish. I had expected that Elden’s DR would do on Hwy 3 what mine did in the 2008 roll on test, but boy, were we both surprised (and pleased). If only I had two spark plugs, Elden would have to buy a twin.